The SIMulation Workbench™ MLToolkit for MATLAB provides support for integrating MATLAB/Simulink models seamlessly into the SimWB environment. The MLToolkit is installed as a part of the MATLAB/Simulink environment and provides access to real-time host from within Simulink via the MLToolkit GUI and within MATLAB via the SimWB API. This MLToolkit GUI and the command line API provide an easy workflow which facilitates the generation of SimWB compliant code from Real-Time Workshop® (RTW) a.k.a. Simulink Coder(MATLAB R2011b and later). Simulink model parameters are automatically extracted from the RTW model and mapped into the RTDB so they can be accessed at run-time.

In order for a Simulink model to talk to external hardware, it needs hardware-specific S-function driver blocks in the model. This means that an engineer may have to maintain two different models: one for simulation and one for code generation. For code generation, Simulink source and sink blocks need to be replaced with Input and Output hardware specific S-function blocks.

SimWB alleviates the need for hardware-specific S-function blocks by providing complete I/O independence through the Real-Time DataBase(RTDB). The RTDB holds the information necessary to configure I/O boards and data bus protocols. I/O boards are configured outside of the model programs, and data acquisition is performed via external I/O tasks which store and retrieve data values through the RTDB.

The SimWB MLToolkit GUI provides a workflow to easily create SimWB compliant RTW code from a Simulink model without having to insert hardware-specific S-function blocks in the model. SimWB-specific blocks are automatically inserted into the model during the code generation process to generate SimWB-complaint code. From the SimWB MLToolkit GUI you can connect to the real-time host, select a System Target File, automatically create an RTDB for your model, generate SimWB-compliant RTW(Simulink Coder) code, and create an executable for your model on the real-time host. 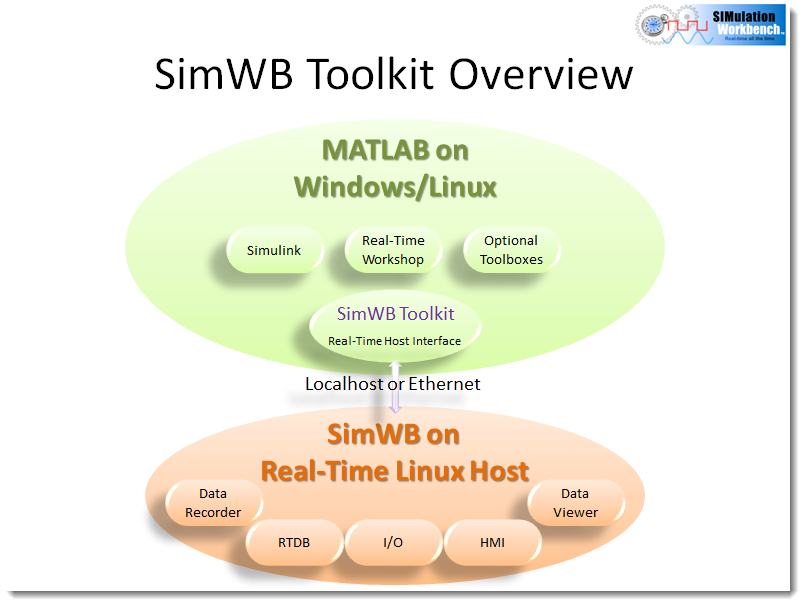 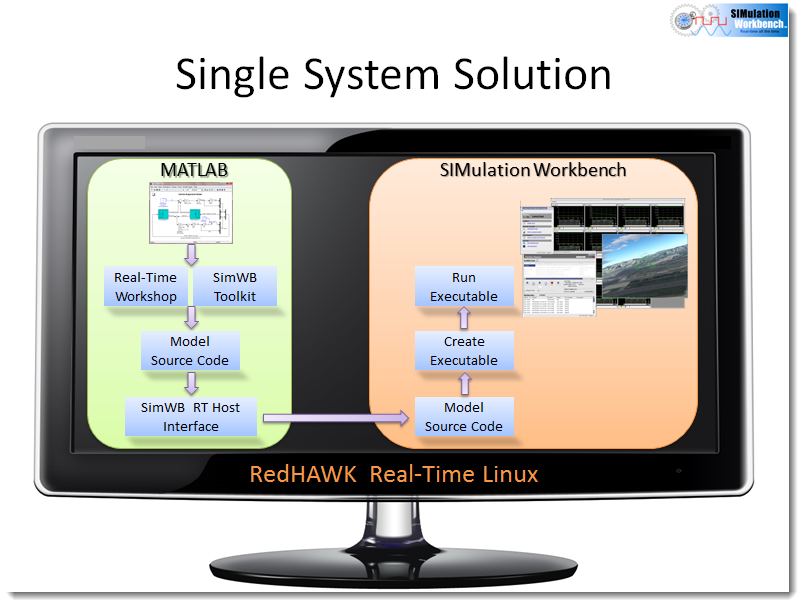 In the Simulink model, on the menu bar select SimWB > Toolkit GUI. 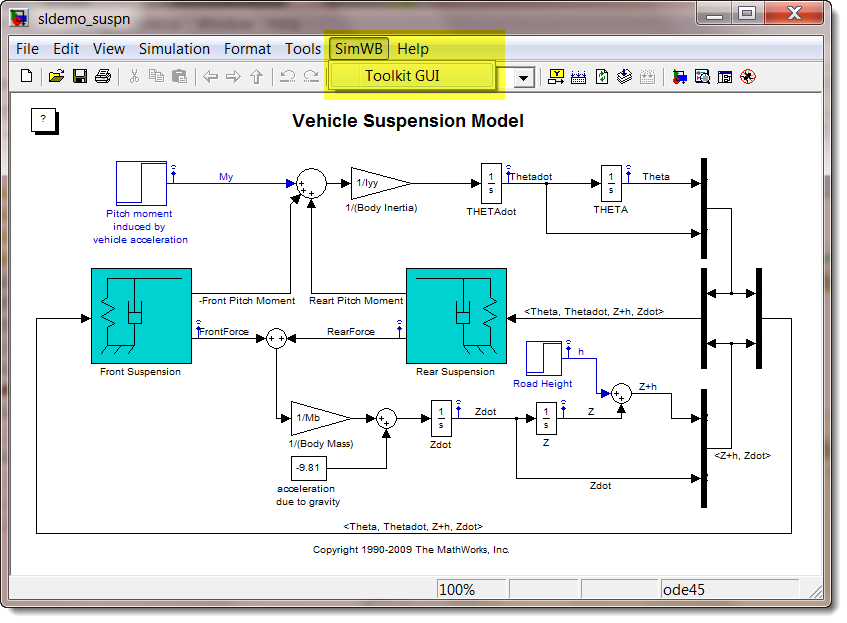 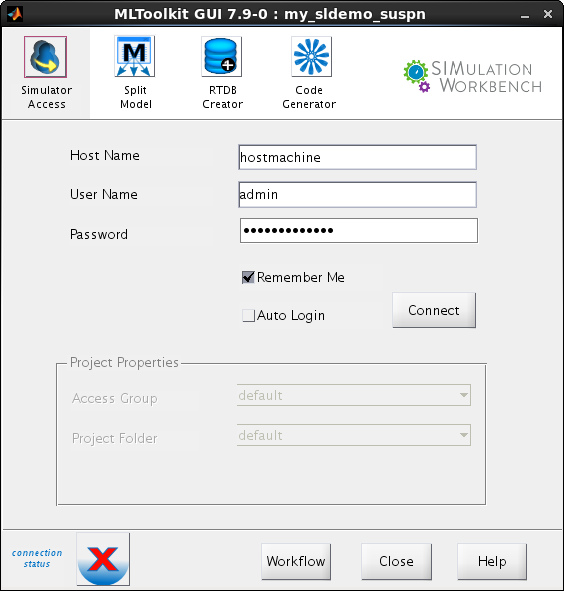 Remembers the most recently used real-time host name, user name, and password across program invocations. These fields are only stored upon a successful connection to the real-time host. The saved password is cleared when this checkbox is unchecked. 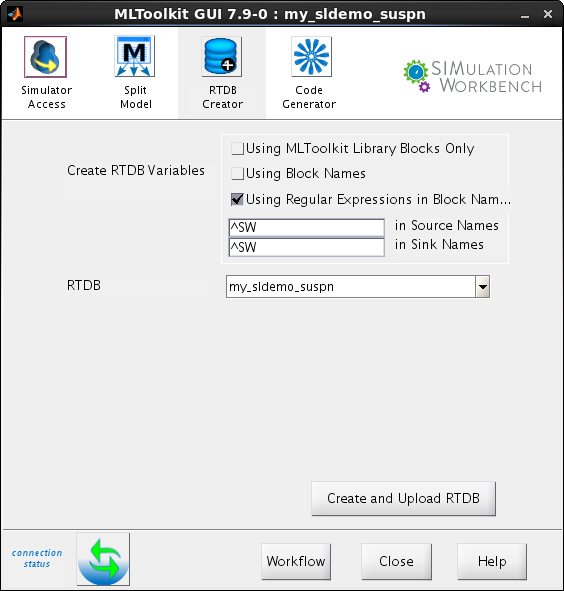 Using Block Names
This option specifies mapping all the supported source and sink blocks to RTDB variables having the same name.

Authorized users are given access to resources on the real-time host and this access is restricted with groups. Users having access to a particular group can access only resources belonging to that group. Users may belong to multiple groups and the Access Group option allows them to share the RTDB only with other users belonging to the selected group.

Append: Append the RTDB variables created for the Simulink model to an existing RTDB on the real-time host.

Overwrite: Overwrite an existing RTDB on the real-time host with the new RTDB variables created for the Simulink model. If there is no existing RTDB, a new one is created. 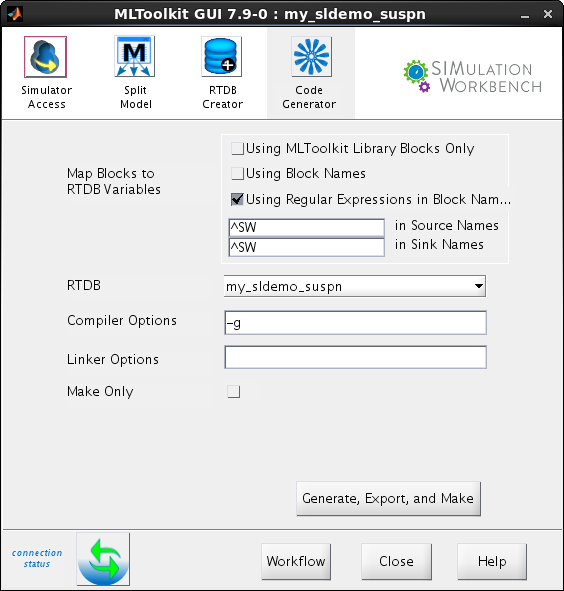 Additional options to pass to the compiler. Examples: -g,-Wall, -I

Additional options to pass to the linker. Examples: -l,-s

Generates code for the Simulink model, packages the source code into a .ZIP file, exports the .ZIP file along with the .MK file to the real-time host, and uses the GCC compiler to create a SimWB compliant executable on the real-time host.

Re-Make the source code for the Simulink model on the real-time host to create a SimWB compliant executable.

Please refer to the SimWB MLToolkit documentation in MATLAB for details.